“Army National Guardsman, Sergeant Derrick Miller was sentenced to life in prison with the chance of parole by the United States Military. His actions saved his unit…and instead of receiving a medal or a thank-you, he became a political prisoner his own country.”

Who is Derrick Miller??

By those who know and love Derrick, he is known for his kind and gentle spirit. He is a hard working, dedicated father of 2 who would do anything in the world for his family. Karina is the oldest – she’s the baby in the picture – and she turned 8 in June, 2014. Her little sister Kaitlyn turned 5 in February. The conviction came down in August 2011. That would put Karina at age 5, and Kaitlyn at age 2. As you can see, he has missed out on so much of their lives due to the corruption within our military and government.

Where it all began….

In September 2010, Sgt. Derrick Miller took part of a combat mission in a hostile area of Afghanistan. An Afghan national who had penetrated the defense perimeter that had been set up by the US Army, was brought to Sgt. Miller’s attention by one of the soldiers under his command. This soldier recognized the man from a security checkpoint one day prior. He positively identified him as the driver of a truck that Derrick’s security detachment had searched, and was transporting armed combatants – members of the opposition – to a nearby combat firefight. Derrick’s men were instructed to let the vehicle pass because of instructions handed down by his superiors in command at the time.

The Afghan man appeared to be gathering information, thus portraying suspicious behavior, ultimately leading to Sgt. Miller being sent to question him. Since he was already confirmed to be an enemy combatant, Sgt. Miller was acting instinctively to protect his unit.

The questioning took place in an open area with another soldier and an Afghan interpreter present. During questioning, Sgt. Miller asked the man why he was within the perimeter. As the man began to speak, his story changed, not once, but twice. He originally claimed to be there to fix a power line that was supposedly down, he later claimed he was there to fix a water pump. What I find odd is that were he there to fix a downed power line and/or a water pump, he was going to have a very hard time doing that with no tools or means for doing the repairs. Originally he was seen accompanied by two men, whom he claimed to be his sons and helpers. However, both of these men left the perimeter without performing any work, and going separate directions to their village. Were they brothers, wouldn’t they be going in the same direction, to the same village? These men were not present during Sgt. Miller’s questioning. While questioning the insurgent things began to get heated. The Afghan insurgent attempted to grab Sgt. Miller’s weapon, ultimately leading to him being shot and killed in the struggle.

Sgt. Miller’s unit was attacked on three sides by Afghan insurgents within 45 minutes of the questioning and death of the Afghan insurgent. In order for them to have attacked in the manner in which they did, someone would’ve had to have reconnoitered their position very closely, soldiers testified during Sgt. Miller’s trial. There is no doubt that the Afghan insurgent had been doing just that. The incident that happened between Sgt. Miller and this man, had forced their entire unit into full alert/100% security, which ultimately had prepared them for the attack just 45 minutes later. This was also testified during Sgt. Miller’s trial. No American lives were lost that day due to Sgt. Miller’s actions which had forced them into the level of preparation that they were in prior to be attacked.

What’s even more crazy is that during the day that all of these events took place, those two men who had originally claimed to be the Afghan mans sons, were both sent back to the village via different routes. They were later believed to have been carrying back detailed information to the insurgents with details as to how to most effectively attack. They had been inside the perimeter for hours, thus giving them ample time to scope things out and pass that information on to the powers that be. All of the details of what took place that day, and within those few hours, were all confirmed and testified by the Afghan interpreter.

“Sgt. Miller believes, despite his conviction and sentence of life in prison for the murder of this Afghan insurgent, that he was acting solely in self-defense and with sound judgment.”

This is an injustice that canNOT be ignored. Sgt. Miller was acting in the best interest of his men, and in a way that I believe anyone would have were they in the same situation. He had more than enough reasoning and confirmation for detaining and questioning this man. And, given the circumstances that followed, less than an hour after the event that took place, proves that Sgt. Miller acted in the most appropriate way possible. Had he not pursued the actions prompted by his combat experience and military training, they could’ve all been killed. They would not have been on high alert, thus meaning they would not have been prepared for the heavy fire and attack that came later. This young man should not have served one day behind bars. 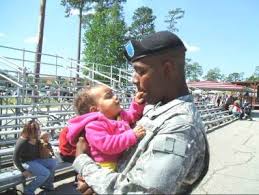 This whole ordeal has ruined his military career, it has destroyed his family in many ways, and it has made his two precious little girls not be able to have their daddy home with them. But, instead forcing them to have to see him from within the walls of Leavenworth, and not often enough if I might add. Having became friends with Sgt. Miller’s mother, it breaks my heart even more to know what he has had to go through, and for what? There is NO need for this. He should be pardoned and reunited with his family. Will you stand with Sgt. Miller and help us fight for his freedom? 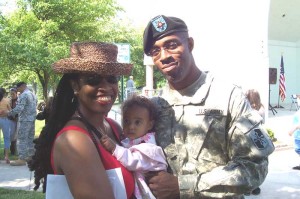 Derrick with his gorgeous mother Renee, and his precious daughter Karina before one of his deployments. Karina is now 8 years old.

A note to her daddy…

Sgt. Miller was recently able to visit with his two precious girls, along with his amazing mother and stepfather. His mother Renee, sent this to me, to share with all of you.

“Derrick had a wonderful visit with his daughters the first weekend in August. He was amazed at how much they’ve grown, and overwhelmingly grateful for the chance to hold them in his arms and tell them how much he loves them face to face. He cherished every moment that he had with them, and misses them dearly every day they’re apart.

My visit with him over Labor Day weekend was balm to my spirit. It was great to see his face, look into his sparkling eyes, and laugh together until our stomachs were sore. I am humbled and so very grateful for the amazing man he is. With everything he’s been through, that he can still laugh and find joy in the midst of this storm is a true testament to his strength of character. I am so very proud of my son, and am counting the days until we can see him again.”

How can you help RIGHT now???

Go to: From the desk of Renee Y. Myers, Sgt. Derrick Miller’s mother.

(editors note: sharing this article with as many friends and colleagues will be very helpful to Derrick as well. At the very end of this article you’ll find a series of sharing buttons which allow you to share this information on various social media platforms. Exposure of this injustice will benefit Derrick more than anything else because it will create political pressure to reverse this travesty. That’s something that YOU – the American citizen who finds this unacceptable – are now burdened with. Derrick Miller needs you to help him and you can do that right now, right his minute, by simply sharing and talking about this case with your friends on social media. Or email it to your family members. Print it out and mail it to your congresspeople in Washington and demand that this egregious error be made right. Please help us help this hero get back to his family where he belongs. -ed)

If you would like to send a word of encouragement to Sgt. Derrick Miller; you may do so with the address listed below:

For more information on similar stories and how you can be proactive in their lives, please visit join the group;Free Our Wrongfully Convicted Warriors on FB.

WAS TWA FLIGHT 800 SHOT DOWN BY THE NAVY TRYING TO PREVENT A TERRORIST ACT?

It's amazing that after 18 years this story is still considered by many to be a conspiracy theory - even in light of hundreds...

“If you go out to the woods today, you’re in for a big surprise….” The words of this innocent children’s song, A Teddy Bear...

HAS THE SMITHSONIAN HIDDEN EVIDENCE OF ANCIENT GIANTS ON EARTH

The Bible in Genesis 6:4 states: “There were giants in the earth in those days; and also after that, when the sons of God came in unto...