WAS TWA FLIGHT 800 SHOT DOWN BY THE NAVY TRYING TO PREVENT A TERRORIST ACT?

It’s amazing that after 18 years this story is still considered by many to be a conspiracy theory – even in light of hundreds of eye witness accounts that it was a missile fired from earth which caused the tragic downing of Flight 800. However, the story isn’t “conspiracy theory” but rather “political conspiracy” – in this case, a president and his government conspiring to cover up the truth after they made an egregious error resulting in the deaths of 230 people.

The truth about what really happened to TWA Flight 800 on July 17, 1996 was hidden behind the National Transportation Safety Board’s findings that the disaster was caused by a fuel tank explosion. But why? Many speculated it was politically motivated because at the time then President Bill Clinton was running for reelection and with less than 4 months to go til election day – he didn’t want to incriminate the Federal government that his administration was in control of. However, even after his reelection, the truth of what happened to Flight 800 was kept secret.

James Sanders, the author of The Downing of TWA Flight 800, has spent the last 18 years investigating the event. He recently appeared on the Coast to Coast AM radio and announced that the flight was brought down accidentally by two missiles fired from a Navy vessel and/or submarine that were in the area to intercept a smaller plane involved in a plot to bring down a commercial flight.  The terrorist attack was allegedly ordered by the architect of the 1993 World Trade Center bombing, Ramzi Yousef. Sanders said Yousef planned the event with calls to the Middle East and chose the date for the attack.

The former police officer and investigator has interviewed many of the witnesses to the shoot-down and other people who support his contention. Sanders said that one woman’s testimony is all that is needed to prove the terrorist attack on the 747 but what she saw was also supported by other witnesses. In FBI reports, the woman is known as Witness 73. She was on the beach on the south side of Long Island when the flight left John F. Kennedy airport about 8:30 p.m. on July 17.

She watched it climb to 13,000 feet and level off prematurely as it passed her flying from right to left of her eyesight. Sanders said at that time of night on that date, it is still light enough to see the colors on the planes. Out of the corner of her left eye, she saw a missile climb from the ocean level up to the right side of the plane and explode near the wing.

Nearby, two men on a drawbridge and another man in a small boat saw a missile rise from the sand line toward the plane. While the witness in the boat saw the missile rise from the sand line, the man on the bridge turned to see it pop from behind a roof line and zigzag upwards toward the plane. Other witnesses reported seeing three ascending missiles, some coming from the ocean, some from land.

Sanders said the CIA admitted that the descriptions the witnesses gave were that of a missile strike, but upon the FBI interviewing the man on the bridge his story changed – afterwards claiming he didn’t see what he previously stated.

According to Sanders the small plane suspected of nefarious, terror related activity was targeted by the Navy which had been alerted to its expected presence by the intelligence community, and that in taking out the small plane one of the missiles used also took out the 747.

Sanders said the Navy was in the area with ships and three submarines, some of which were equipped with Cooperative Engagement Capability, an automation of the fleet defense systems to track and engage a ballistic missile. He also said following the tragedy, the missile system was ripped out of one submarine, and it was unexpectedly not given the go ahead for combat. It was only recently signed off for combat, some 18 years later. One of the submarines in the area that night, the Wyoming, had its commissioning delayed and its captain and exec were both relieved of command.

More odd behavior by the Navy immediately followed the crash. The Navy sent its best deep salvage ships to the crash site, kicking out the New York City Police Department divers. The Navy reported it couldn’t find the plane’s black boxes yet several owners of private boats in the area heard the boxes pinging.

More than 80 FBI agents interviewed “potential witnesses” daily following the crash but no verbatim records of the witness interviews were produced for The National Transportation Safety Board; instead, the FBI agents who conducted the interviews wrote summaries that they then submitted.  The NTSB wanted to conduct their own interviews of the witnesses but the FBI objected, withheld the names of those witnesses, and the NTSB deferred. Finally, In April 1998, the FBI provided the NTSB with the identities of the witnesses but due to the time elapsed the decision was made to rely on the original FBI documents rather than re-interview witnesses.

The following is one such FBI witness statement summary (with personal information redacted).

Evidence of witness intimidation, evidence tampering, censored reports and even false testimony before Congress was reported. Not one of the 200 witnesses to the event was allowed to testify at the public hearing.

Finally, in 2003, the Flight 800 Independent Researchers Organization, a group consisting of scientists, engineers, aviation professionals and former airline crash investigators – all dedicated to determining the truth about what happened to Flight 800 – announced it’s findings:

“Probable Cause: A surface-to-air missile, launched from the ocean off the coast of Long Island rose up and exploded at or near TWA Flight 800. The explosion of the near-empty center wing fuel tank was a secondary explosion, initiated by the explosion a missile warhead. The combined destructive power of the missile and the fuel tank explosion caused catastrophic structural failure of TWA Flight 800.”

The above link leads to the FBI website where the 707 page analysis file resides. From that analysis the following lab assessment form indicates that of 18 swabs used to collect evidence following the fatal crash – 3 were positive for “explosive chemicals.” 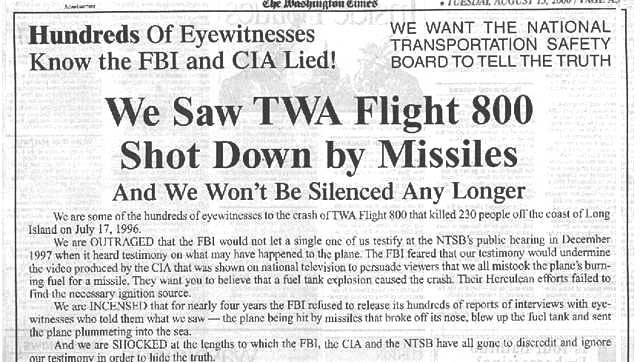 “Army National Guardsman, Sergeant Derrick Miller was sentenced to life in prison with the chance of parole by the United States...

“If you go out to the woods today, you’re in for a big surprise….” The words of this innocent children’s song, A Teddy Bear...

HAS THE SMITHSONIAN HIDDEN EVIDENCE OF ANCIENT GIANTS ON EARTH

The Bible in Genesis 6:4 states: “There were giants in the earth in those days; and also after that, when the sons of God came in unto...