An Egyptian court has just sentenced a mother and her 7 children to up to 15 years in prison for attempting to convert from Muslim to Christianity. The mother,  Nadia Mohamed Ali, converted to Muslim after marrying her now deceased husband. Upon his death she attempted to convert her and her offspring back to Christianity, a process which spanned nearly 10 years. But under the new Sharia Law based – Muslim Brotherhood indoctrinated Egyptian constitution, that move is considered illegal, landing the family and even the clerks who were assisting them, in prison. 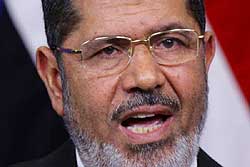 Meanwhile across town, thousands of Christian girls are kidnapped and forced into servitude to Muslim men, suffering constant rape and abuse, yet the new Egyptian government led by Muslim Brotherhood President Mohamed Morsi, who’s mug appears to the right just for the sake of putting a a face with the criminal – does nothing. Not only do they “do nothing” – they fully support these actions as per the scripture they so closely cling to. If OUR president would like to chastise a group of people who are “clinging” to guns and religions, perhaps he could give some advice to this clown the next time he and his Muslim Brotherhood henchmen come for another pajama party out OUR White House, which they had a habit of doing during Barack Obama’s first term.

Since our President is so cost conscious(snicker)perhaps he could send word via any one of the six American Islamist activist who currently infest the Obama Administration as Muslim Brotherhood operatives. If you’d like to peruse through the list of Obama’s Islamic/Muslim Brotherhood cabinet members, complete with photo’s – read my July article Michele Bachmann is Correct: Pro-Islam Infestation of the Obama Administration.

A research fellow at Hudson Institute’s Center for Religious Freedom, Samuel Tadros, said that situations such as Nadia’s are now to be expected and that Egypts new Sharia fueled constitution is a disaster for religious freedoms.  “The cases will increase in the future,” Tadros warned. “It will be much harder for people to return to Christianity.” Human rights advocates said it’s a sign of things to come. Jordan Sekulow, the executive director of the American Center for Law & Justice says:

”Now that Sharia law has become an integral part of Egypt’s new constitution, Christians in that country are at greater risk than ever. This is another tragic case that underscores the growing problem of religious intolerance in the Muslim world. To impose a prison sentence for a family because of their Christian faith sadly reveals the true agenda of this new government: Egypt has no respect for international law or religious liberty.”

There are currently 7 million Christians living in Egypt.

THIS is the result of The United States of America supporting revolts in the middle east and then a certain President using his power and influence to get Islamic mobsters, aka the Muslim Brotherhood, elected. That same U.S. government and President are poised to send that Sharia Law implementing Muslim Brotherhood led country 10 f-16 jet fighters and 200 Abrams tanks in the first quarter of 2013 and a cool 1.5 billion of YOUR tax dollars later in the year, disguised as “foreign aid.”

If you find the story above disgusting in regards to the persecution of Christians and the funding of radical Islam and the Muslim Brotherhood, perhaps you as an American Christian taxpayer should consider ending your contributions to THE UNITED STATES OF AMERICA, for it’s that corporation which is currently responsible for the proliferation of Sharia, radical Islam and the Muslim Brotherhood worldwide.

To be belatedly brief – funding the U.S. government means you’re funding the destruction of Christianity and Judaism by monetizing those who seek to bring harm to peace loving people across the globe.

The Pentagon, after consulting with atheist Michael Weinstein, founder of the Military Religious Freedom Foundation (MRFF), has released...

Six days ago the gruesome details began to emerge from New Jersey where 28 year-old Yusuf Ibrahim had been charged with killing 2...