INCOMING: HOW THE DOJ SUBVERTED THE JUDICIAL SYSTEM TO CONVICT THE DECORATED VETERANS OF RAVEN 23

Though you may not recognize their names, you know their story.  Rather, you know the story the government alleged, the media reported, and the jury seemingly accepted—that these four members of Blackwater’s Tactical Support Team Raven 23 opened fire on unarmed Iraqi civilians in an unprovoked attack in Baghdad’s Nisur Square traffic circle on September 16, 2007, after stopping traffic to establish a route of egress for another team that had been attacked by a vehicle-borne improvised explosive device (VBIED).

For those who know the men of Raven 23 and the details of their case, this story is not the truth. And, as the growing number of Raven 23 supporters indicates, those who take the time to look are finding the overwhelming evidence that Raven 23 took insurgent fire and that several members of the team used the proper sequence of escalating force to stop what no less than eight eyewitnesses testified was a reasonably perceived VBIED threat from a white Kia that broke from the stopped traffic and accelerated toward Raven 23. (most images below will expand into a gallery upon click, giving you a closer view)

However, those who take the time to look are also finding proof of how, rather than confront this evidence head-on, the Department of Justice subverted the judicial process to ensure the jury would have no choice other than to return guilty verdicts, notwithstanding the evidence establishing reasonable doubt for every charge alleged.  This is the truth behind the Raven 23 convictions that everyone should know.

For nearly seven years, the DOJ suppressed evidence proving that Raven 23 took incoming insurgent fire.  Within 30 minutes of the Nisur Square incident, an Army Captain was on scene to informally survey and report to his superiors.  He took several photographs, including a photograph of spent AK-47 shell casings behind a bus stop that corresponded to one of the locations from which members of Raven 23 had reported receiving incoming fire.

The Army Captain’s photograph is a critical piece of evidence because the scene was not secured, and the State Department’s investigation (which cleared the men of Raven 23) was not conducted until three days later, after the scene had been cleansed.  The Army Captain turned all of his photographs over to the government, and the DOJ used all of them, except the one showing the exculpatory AK-47 shell casings, at some point during its prosecution.  It was not until midway through the 2014 trial—after several key government witnesses had already testified in support of the DOJ’s theory that Raven 23 took no incoming fire—that the DOJ finally turned this exculpatory evidence over to the defense team.

The DOJ not only committed a Brady violation by suppressing this exculpatory evidence, but by failing to turn this evidence over before trial as required by law, the DOJ was also able to minimalize critical evidence that would otherwise have been a feature of the trial.

However, the DOJ’s disregard for the evidence does not stop with its egregious Brady violation.  After losing a legal battle to prosecute Nick Slatten for multiple counts of manslaughter and attempted manslaughter—charges the original prosecution team allowed the statute of limitations to run out on after conceding there was not sufficient evidence to pursue them—the DOJ vindictively prosecuted Nick for first-degree premeditated murder, a charge for which there is no statute of limitations.  When Nick turned himself in after the murder indictment came down, the DOJ represented that it had no new evidence against him.

Subsequently, at trial, the DOJ failed to introduce any evidence that Nick shot or killed the person he is convicted of murdering—the driver of the white Kia.  Instead, the DOJ made Nick out to be a villain who hates Iraqis and theorized that he fired the first shots at the driver just to start a firefight, despite the fact that there is no evidence that proves, or even indicates, that he did so.  The DOJ even persisted with its theory that Nick murdered the driver after its own prosecution witness admitted at trial to killing the driver by firing the first three-to-five well-aimed shots through the windshield at his head, after physical evidence backed that up, and after several other members of Raven 23 besides Nick admitted to using escalating force to stop the white Kia because it was a reasonably perceived threat.

Given the lack of any evidence proving that Nick committed premeditated murder and in light of the overwhelming evidence that Paul, Evan, and Dustin’s actions were taken in self-defense, the DOJ did the only thing it could to secure their convictions—it told the jury that it could find them guilty by association with another member of the Raven 23 team who admitted to indiscriminately firing his weapon during the incident. This person took a plea deal for killing the passenger of the white Kia, and he is also the person who admitted to killing the driver of the white Kia.  Evidence at trial established that he fired over 100 rounds during the incident and that his shots accounted for the deaths and injuries of the people who were not real or reasonably perceived threats.

The DOJ then used this one man’s admitted wrongdoing as its trump card.  It told the jury that if they found that anyone committed a crime during the incident—even if that person was not on trial—they could also find Nick, Paul, Evan, and Dustin guilty under an aiding and abetting theory if they also fired their weapons.  The DOJ’s misuse of a theory that applies to crimes like bank robbery denied these men their right to self-defense.

This is a rights violation of constitutional proportion because proof beyond a reasonable doubt of every element of the alleged crime—including lack of justification in a self-defense case—is a bedrock principle of the constitutional right to due process.

Like its disregard for the evidence, the DOJ’s disregard for the law is not limited to its impermissible guilty-by-association argument.  To even prosecute the men of Raven 23 in the first place, the DOJ used a law—the Military Extraterritorial Jurisdiction Act—that, by its plain language, does not apply.  To establish jurisdiction under MEJA, as it was worded in 2007, the defendant must either have been a contractor for the Department of Defense or a contractor for any other federal agency whose job related to supporting the mission of the Department of Defense.

Remember, the men of Raven 23 had contracts with the Department of State, they were not DOD contractors – and, according, to Gordon England, who was the Deputy Secretary of Defense at the time of this incident, the men of Raven 23 “were not supporting the DOD mission.”  The government’s argument to the contrary?  Sometimes American contractors and American soldiers would help each other if they found themselves getting shot at by the same enemy.  The fact that Americans in a war zone might help other Americans in a war zone had nothing to do with the job the men of Raven 23 were doing in Nisur Square on the date of the incident, and it in no way authorizes their prosecution under the Military Extraterritorial Jurisdiction Act (MEJA). 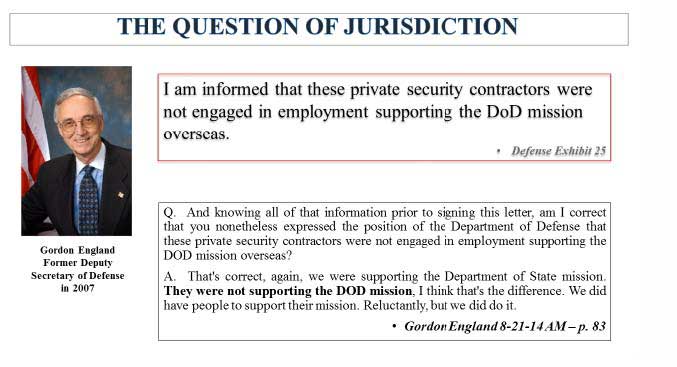 to using a law that does not apply to get into the courthouse, once there, the DOJ improperly used a weapons law to trump up the charges against Paul, Evan, and Dustin.  The weapons law, 18 U.S.C. § 924(c), prohibits the use of certain types of weapons in the commission of a crime of violence.  From the legislative history, it is clear that the law’s purpose is to combat the use of firearms in street crimes by encouraging would-be criminals to leave their guns at home.  Unlike someone who has a choice about whether to leave his gun at home, the State Department required Paul, Evan, and Dustin to carry the weapons at issue as part of their job.  Yet, by using the law in this patently unintended way, the DOJ has ensured that they will each receive thirty-year mandatory minimum sentences.

The DOJ’s subversion of our judicial process—not the evidence—is the truth behind the Raven 23 convictions, and it undermines any confidence in the outcome of their trial.  While these and other issues will be presented on appeal, that is of little comfort to four veterans who must await the results of that long process in prison; or to their families, including wives and children, who have been left to pick up the pieces.

Nick Slatten, Paul Slough, Evan Liberty, and Dustin Heard are decorated veterans who sacrificed their youth in the service of our country.  They are highly respected by their peers who have first-hand knowledge of their character and conduct under fire.  While every defendant in an American court deserves the fair and just application of our laws, these men have earned it, and they did not get it.  If you agree, we invite you to join us in speaking out against this injustice.