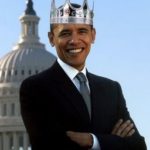 Writing for the Washington Post, Jonathan Zimmerman, a professor of history at New York University, has suggested that U.S. President Barack Obama – who is currently enjoying a 37% approval rating – should be entitled to run for a 3rd term as president in 2016.

According to Zimmerman’s logic, if Obama could run again it would give his current policies more political teeth with fellow politicians right now during his second term. He also attempts to convince readers that a president’s second term is a free-for-all since he no longer has to hold himself accountable to the will of the voters and that a 3rd term would prevent that:

Democratic lawmakers would worry about provoking the wrath of a president who could be reelected. Thanks to term limits, though, they’ve got little to fear.

Nor does Obama have to fear the voters, which might be the scariest problem of all. If he chooses, he could simply ignore their will. And if the people wanted him to serve another term, why shouldn’t they be allowed to award him one?

Zimmerman and others who are for an Obama 3.0 are all aware that it’s not possible unless a drastic change takes place. It’s a violation of our constitution’s 22nd amendment for a president to serve more than 2 terms, thanks mostly to FDR’s extended stay as president from 1933 to 1945 – eventually culminating in his death early in his 4th term in office. That exercise in dictatorship resulted in a republican congress establishing the 22nd amendment to the constitution which limits presidential terms to 2:

Section 2. This article shall be inoperative unless it shall have been ratified as an amendment to the Constitution by the legislatures of three-fourths of the several States within seven years from the date of its submission to the States by the Congress.

While I personally believe there are numerous similarities between the socialist tendencies of both the late Franklin Delano Roosevelt(who proposed and then used executive privilege to enact a 100% tax on all incomes above $25,000 – which congress later repealed) and current President Barack Obama, in simple terms – BO at 37% ain’t no FDR – who was experiencing approval ratings well above 80% after 10 years in office.

Is it possible that democrats could overtake congress in 2014 and rule against the 22nd amendment?

Not for a president with a current 37% approval rating which is going to tank even further next year when employer mandated changes to employee health care robs more than 80 million Americans of their existing  insurance coverage.

Many people argue that there’s currently a bill – H.J. Res 15 – calling on the 113th congress to repeal the 22nd article of amendment and that’s a valid point. But that legislation’s author, Rep Serrano, Jose E., has brought that request before congress no less than 9 times since 1997, including 4 times during the terms of former President George W. Bush. While it does make the notion of an Obama 3rd term technically possible – the chances of it being taken up and passed by congress and then ratified by the requisite number of states required is highly unlikely.

Three more years to chase political-agenda-only issues while avoiding the real work of putting our economy back on the map is more than enough. There’s been no gains for average Americans during this President’s 5 years in office with the only benefactors being homosexuals, illegal immigrants and radical Islamists.

But there’s plenty of power in Washington to be jousted over and I can assure you he won’t leave quietly. The Obama’s told ABC’s Barbara Walters, in an interview that’s slated to air tonight(Nov 29), that they intend to remain in Washington, D.C. after his second term expires.

Even scarier than an Obama 3rd term would be the idea that his brand of political radicalism could become the norm in our country.

The only way to get Barack Obama out of office, or at least, out of the political spotlight and out of power after his presidency is finally finished – is to rebuke his policies and force his democrat constituents to cringe at the mention of his name. Then and only then will Barack Obama and his Alinsky inspired political agenda actually be removed from political influence and power.

DID OBAMA REALLY CALL PUTIN A JACKASS? NO. – THE CONSEQUENCES OF POLITICAL SATIRE