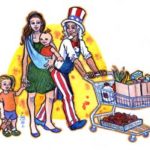 Nine million mothers and their dependent children receive food assistance via the Special Supplemental Nutrition Program for Women, Infants, and Children (WIC). The USDA program allocates grant money to states for food, health care referrals and nutrition education for moderate to low-income pregnant women, new mothers and their children up to age 5. Of all the infants born in the United States a FULL 53 percent are born to parents who are dependent upon the vouchers.

Due to the government shutdown which began on October 1st the federal funding for the program has ended. The Department of Agriculture noted in a memo last week that “without congressional approval of new spending, there won’t be any funding available for WIC’s clinical services, food benefits or administrative costs.”

“States may have some funds available from infant formula rebates or other sources, including spend forward authority, to continue operations for a week or so, but States would likely be unable to sustain operations for a longer period,” the memo said. “Contingency funds will be available to help States – but even this funding would not fully mitigate a shortfall for the entire month of October.”

Other federal food assistance programs, such as food stamp benefits also known as the Supplemental Nutrition Assistance Program (SNAP),  won’t be impacted by the shutdown. Neither will Child Nutrition (CN) Programs  including School Lunch, School Breakfast, Child and Adult Care Feeding, Summer Food Service and Special Milk because those programs are operating with funding which was appropriated through the 2009 American Recovery and Reinvestment Act.  The food stamp benefit program itself has about $2 billion in contingency funding that Congress approved this year which doesn’t expire until the end of fiscal year 2014.

With experts agreeing that both sides in Washington are deeply entrenched and unwilling to budge – parents who depend on WIC to supplement their pantries should take notice and be prepared for a possible extended period without WIC benefits.

Writing for the Washington Post, Jonathan Zimmerman, a professor of history at New York University, has suggested that U.S....

In close coordination with Planned Parenthood, Democrat lawmakers have repealed the Colorado criminal abortion statutes which is the...