Twenty eight year old First Lieutenant Clint Lorance of North Texas was recently found guilty of two counts of murder in the July 2012 killing of two suspected Taliban fighters in a remote sector of Kandahar Province Afghanistan. Lorance was sentenced to 20 years in Leavenworth, dismissed from the army and must forfeit all pay. He was found not guilty of making a false official statement.

Prosecutors insisted Lorance ordered his men to open fire on unarmed civilians which violates the U.S. military‘s official rules of engagement – a policy that requires them to hold their fire unless there’s evidence of hostile action or direct hostile intent.  Capt. William Miller, a government prosecutor, told the jury “Lt. Lorance used his rank and position to harass, intimidate, threaten and murder Afghans.”

Lorance’s defense argued that the village being patrolled was under Taliban control and had long since been vacated by all known civilian inhabitants due to constant violence and warfare. In fact, Lorance had just taken command of that particular platoon because in the days prior they had suffered several losses – including the loss of their prior commander. Lorance’s very presence in the situation was a testament to the “hostile action” and definitive “hostile intent” that U.S. troops had come to expect in that district.

Clint Allen Lorance was born on December 13, 1984 and is a North Texas native who grew up in the town of Celeste. He was a member of the FFA as well as a Police Explorer throughout High School who also worked 3 jobs simultaneously to help cover household expenses as well as prepare for moving out on his own when he turned 18.

On the day of his 18th birthday Lorance walked into the Army recruiting station in Greenville, Texas and joined the Army as a Military Policeman. Upon graduating from Basic Training and AIT he shipped off to his first duty assignment in Pusan, South Korea. His next duty station was in Fort Richardson, AK, stopping briefly at Fort Benning, GA to earn his Airborne Wings.

As part of the 4th Airborne Brigade Combat Team In Alaska, Clint deployed for his first deployment to Iraq from September 2006 to November 2007 , initially a 12 month deployment which turned into a 15 month deployment. Lorance was then assigned to the 82nd Airborne Division’s 4th BCT and deployed to Afghanistan in March 2012 to Southern Afghanistan. During his deployment, Clint was the squadron’s liason officer to the commander until selected to become a platoon leader.

Lorance’s patrol, consisting of 16 US Infantrymen, 5 Afghan National Army Soldiers, and 1 US Interpreter, left their Strong Point early in the morning on July 2nd 2012 headed to a remote village within the Kandahar sector of Afghanistan for a combat patrol.

Traveling on foot with electronic mine-sweepers in the front due to the heavily mine-riddled terrain, Lorance was in constant contact with overhead US Army helicopter pilots who had warned Lorance over the radio of enemy presence to the North, East and West of the Platoon’s position on the ground. Lorance confirmed with the pilots a good description of the enemy, and pilots continued to track and provide overhead surveillance for LT Lorance’s platoon.

As the patrol approached the village they spotted 2 individuals who were sitting on a motorcycle at a distance observing the patrol’s movement. The individuals matched the exact description that the Army pilots had relayed to Lorance moments earlier.

It’s common practice for Taliban fighters to use what the US calls “spotters”. This is a tactic the Taliban uses to communicate with one another and track the movement of platoons, just as it was apparently doing in the case of Lorance’s patrol.

Official intelligence reports for the area identified any personnel owning or operating a motorcycle as Taliban because as I mentioned earlier, there was no local population living there. The local population had long since moved out of the area because it had been taken over by the Taliban. Essentially, if they were in the area, they were up to no good and if they were in that area and perched upon a motorcycle sitting stationary there was little doubt they must have been Taliban scouts intent on divulging the existence and whereabouts of Lorance’s platoon – as had obviously happened just days prior when the same platoon was attacked in the same geographic location – losing several men.

Realizing the situation afforded him just seconds to react, Lorance made the decision to protect his troops by preventing the scouts from relaying back to the Taliban any further information as the platoons whereabouts by ordering a trained US marksman, who was standing guard in an overwatch position from the road on a US gun truck, to fire two long-range precision shots, eliminating the threat, but it was too late. Within minutes Lorance and his men found themselves embroiled in a gunfight with Taliban fighters.

Following the precision shots US Intelligence intercepted enemy radio signals talking about the position of the patrol and planning an ambush. Moments later, Lorance’s men engaged with and killed two confirmed Taliban fighters who were planning the ambush. Simultaneously, Lorance’s men in a separate location intercepted and detained a Taliban fighter who was attempting to flee the village on a motorcycle. Another suspected Taliban fighter was shot in the arm and was intercepted by the Afghan Army Soldiers. Lorance ordered his Combat Medic to immediately stabilize the man and bring him back to base with the patrol for further medical treatment and remain on Lorance’s base pending the investigation.

Upon return to base, Lorance ordered both of the captured men be tested for gunshot residue on their hands. Both men tested positive, confirming Lorance’s suspicions that the men had fired weapons recently.

Lorance then ordered that both men be physically separated, put into a shaded area, and be given food and water. Two-three hours later, the prisoners were transported to the Detainee processing facility at the Brigade Headquarters.

Even though both men tested positive for gunshot residue and were acting suspiciously military intelligence released them back into the wild.

The two aforementioned scouts were not confirmed as enemy fighters by that same exact military intelligence and the Army assumed Lorance guilty of random acts of murder – fired him from platoon leader and took his weapon. He was moved to HQ to assume administrative duties while awaiting the investigation.

The marksman in this particular case, as well as 4 other U.S. military operatives involved in the events of July 2 2012, were exonerated of all responsibility in exchange for their testimony against Lorance.

On August 1st Lorance was found guilty on 2 counts of murder by a 10 member jury comprised of military officers. During the sentencing hearing Lorance said “I take full responsibility for the actions of my men on 2 July, 2012.”

Former military colleagues appeared and spoke on behalf of Lorance’s character, telling the jury they always knew Lorance as a smart, above-average soldier.

Capt. Zachary Pierce called Lorance “trustworthy,” “unparalleled” and “one of the kindest and gentlest people I’ve ever met.”

Regardless, Lorance was sentenced to 20 years at the Fort Leavenworth military prison in Kansas.

After the sentence was announced, Lorance turned to hug his crying friends and family members who traveled from Texas to North Carolina to watch the trial and support their hero during his court trial.

“Y’all can handle this,” Lorance told them. “Be strong.”

Lorance’s family has maintained that he was unfairly singled out by the military for simply doing his job.

“Any military mother, if I were you, I’d get them out of the military,” Lorance’s mother, Anna, said through tears as she and the rest of his family left the courthouse. “I’d get them home.”

I spoke to Anna Lorance for nearly an hour via telephone today preparing to write this report. The only thing more predominant than utter sadness in her voice and the words she chose to relay to me – was pride. She seemed quite torn between the crippling sadness of the injustice which has befallen her son and the beaming prideful joy any parent would have for their son or daughter who’s accomplished great things.

Clint Lorance is being added to our DCX “Leavenworth 10 – Uncommon Injustice” series page where he will be honored alongside others who have suffered the same fate. While he wasn’t one of the original 10 members of that unfortunate group of brave heros – it’s becoming quite obvious that the first 10 were merely the beginning. Based on my own research I suspect there are approximately 90-100 soldiers currently serving time in Leavenworth for charges related to killing the enemy in order to protect themselves or the lives of their comrades – resulting in nothing more than U.S. soldiers becoming POW’s of the United States’ current policy of radical Islamic appeasement.

Visit the DefendOurSoldier.com website dedicated to Clint Lorance by his friends and family

Check out the following video and share it with your friends. With your support and interest we can make all Americans aware of Clint’s case and the cases of other American hero’s who have been unfairly persecuted in the name of injustice: 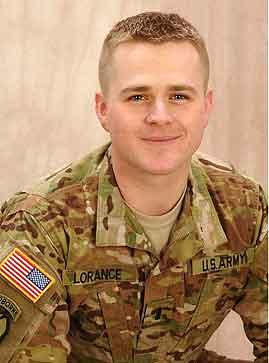 Clint Lorance has dedicated his entire adult life to serving his country and protecting American freedoms. During his tours he risked his life combating an enemy who wishes to bring great harm to our beloved country.

How ironic that — instead of his life being taken by that enemy, it was taken, in many regards, by the very government that ordered him onto the field of battle to begin with.

You know what to do. My readers have done it more than 500,000 times in regards to these stories of military injustice. Click, share, comment, sign the petition to free Clint Lorance, visit his website, and/or make a donation to his legal defense – but please get involved and spend some time every day informing others who might not be aware that our own government is persecuting, prosecuting, and imprisoning our very own sons and daughters for the alleged crime of protecting American lives and defending American soil.

Clint’s mother forwarded this letter from Clint to me to share with who Clint refers to as “his fellow Patriots” – and that means YOU: 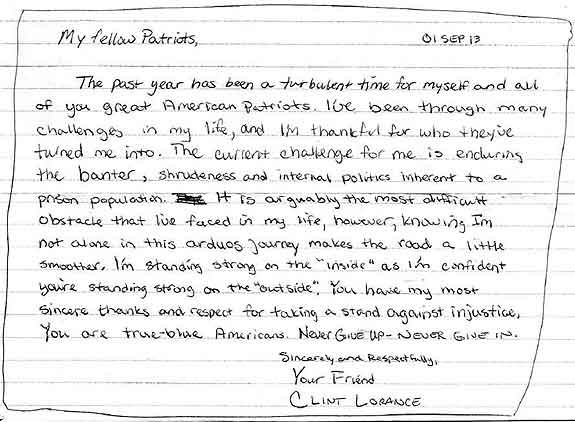 If you’d like to mail Clint letters of encouragement and support you can send those letters to:

Shock, outrage and “audible gasps” were the responses from a large group of police officers, elected officials and attorneys...

According to reports by CBS news and CNN – an internal memo from the State Department’s Office of the Inspector General alleges...