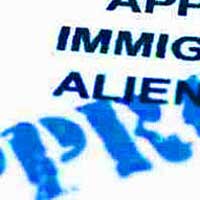 Progressives have decided to champion yet another group of “victims” and they’re currently rolling out the red carpet for illegal aliens. Amnesty and “pathway to citizenship” are all the buzz among elected officials. While progressives like the more sanitized term “undocumented workers,” candy coating it does nothing to change the fact that these people have entered the United States unlawfully. Illegal aliens are a serious problem and a growing threat to the safety of American citizens.

Last week, Isabel Diaz-Castillo, an illegal from Mexico was arrested by police in Minneapolis, MN, for kidnapping. Diaz-Castillo was apprehended just  “hours after a statewide AMBER Alert was issued for 8-month-old Carlos Orozco.” She is being held in the Hennepin County Jail.

Also last week,  police in Fayetteville, NC, arrested 24 year old Francisco Echeverria for murder. Echeverria allegedly shot  former Marine Craig Spencer Morris in the chest after a verbal altercation. He is being held in the Cumberland County Jail on a first-degree murder charge.

Earlier this month, police in Augusta, GA, arrested Pablo Chaves for killing his neighbor’s dog. Chavez originally told police he shot the dog twice with a 12-gauge shotgun, but the subsequent investigation revealed the “Rottweiler lying dead with a large gash on his neck. A bloody chainsaw was next to the dog’s body.” Chavez is being held in the Richmond County Jail on charges of “aggravated cruelty to animals, possession of a firearm during the commission of a crime and discharge of a firearm on or near a public highway.”

In January of this year, Jaime Sanchez Ontiveros who had been previously deported, was charged with sexual assault and attempted sexual assault. He is being held at the McLennan County Jail in Texas. Another case from Texas in January involved illegal alien Luis Enrique Landin, running over a young boy on the sidewalk. 6 year old Brandon Abrams, a Cub Scout, died from the injuries he sustained. Landin has been charged “with intoxication manslaughter and driving without a license. He is currently being held in the Bexar County Jail.”

Back in December of 2012, the Department of Homeland Security admitted that it would be cheaper to deport illegals rather than keep them on U.S. soil.  From his report, “DHS confirms cheaper to deport every illegal alien than allowing them to stay,” Dave Gibson writes:

“So, while it would cost a one-time fee of about $135 billion to deport every single illegal alien in the country, it is actually a bargain considering the fact that it already costs us $113 billion annually to keep them here.
In other words, the mass deportation would pay for itself in a little over a year.”

With the impending sequester, the Department of Homeland Security has released hundreds of illegals in an attempt to save money. DHS claims that illegals are still subject to some type of supervision. They may be monitored by an electronic device or check in with ICE either in person or by phone. Considering the fact that five illegals have made the FBI’s Most Wanted, this offers little reassurance.  Releasing violent criminals into the general population puts everyone at risk. In fact, LiveLeak.com states:

Illegal immigration is an ongoing danger for Americans. It only stands to reason that one who enters this country unlawfully would not be a law abiding citizen. The crime statistics are alarming at best. It seems that none of our elected officials have the stomach to deal with this head on. Illegals ought to be rounded up and deported. They are not victims of anything as much as the left would like us to think they are. To reward them with amnesty in any form will only exacerbate the problem and encourage further disrespect for the law.

Writing for the Washington Post, Jonathan Zimmerman, a professor of history at New York University, has suggested that U.S....

US SOLDIER JOHN HATLEY GETS LIFE IN LEAVENWORTH – DENIES WRONGDOING

Last week, DCX brought you an update on the travesty of Lt. Michael Behenna’s case. Sadly, he’s not alone in his quest to clear his...