On Thursday the U.S. Senate was given the opportunity to prevent the Obama administration from fulfilling a 2009 deal to send heavy armaments to the Muslim Brotherhood led country of Egypt but the H.R. 325 amendment, proposed by  Sen. Rand Paul (R-Ky.), was defeated by a 79–19 vote to block the measure (a yes vote means YES we want to send the hardware or YES we want to block Paul’s legislation preventing the sale of armaments to Egypt).

Paul questioned the wisdom of sending heavy armaments during a time when “many see Egypt descending into chaos,” and made sure every ear in the chamber was aware of his opinion of  President Mohammed Morsi’s radical views regarding Jews and Christians in Israel as well as the Egyptian government’s recent conduct in general:

“I think this is particularly unwise since Egypt is currently governed by a religious zealot, a religious zealot who said recently that Jews were ‘bloodsuckers’ and ‘descendants of apes and pigs. This doesn’t sound like the kind of stable personality that we would be sending our most sophisticated weapons to.  We send 20 F-16s to Egypt – which already has 240 F-16s. What does Israel feel? They’ve got to have two for every one Egypt has. It escalates an arms race, it makes it more difficult for Israel to defend herself. Today we have a chance to stop this folly.” (full video and transcript of Paul’s remarks can be found at the end of this article)

The tanks and jets Paul referred to in his proposal were pledged to Egypt in December of 2009 when the former government led by then President Hosni Mubarak was still in power. The first four planes, built by Lockhead Martin, were delivered last week. The $395 million tanks contract was awarded to General Dynamics Land Systems in November 2011 with instructions to produce 125 M1A1 Abrams tanks for Egypt, with deliveries set to begin in July 2013.

“Would that … this amendment was as simple as the junior senator from Kentucky described it. His amendment would hinder our military assistance program, licenses for commercial sales of all major military equipment, including aircraft, ships, tanks, armor, parts and so on. It would mean a loss of thousands of American jobs. We’d incur more than two billion dollars in contract-termination penalties for U.S. taxpayers. But we’d also put at risk our access to the Suez Canal, the over flight by the U.S. Air Force over Egyptian territory, cooperation in the Sinai, Gaza, Syria, our emphasis and our ability to keep the Israeli-Egyptian peace agreement going. Do I have problems with the way the Morsi government is going? Certainly. But removing our ability to be involved, with keeping that peace agreement and our ability to influence those – this is not the way to do it.”

The total roll call vote: (I’ll note here that the new -as of today- Sec of State John Kerry didn’t vote on the measure) 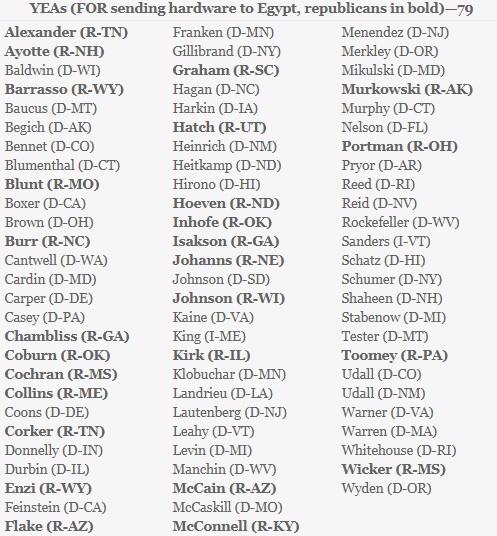 In a separate statement issued after his remarks on the upper chamber floor, Leahy added that U.S. law “already conditions U.S. military aid on Egypt’s adherence to its peace treaty with Israel, and on protecting fundamental human rights and due process of law. That is current law, and it needs to be faithfully applied.”

In March of 2012, however, former Secretary of State Hillary Clinton said that those conditions and restrictions on military aid would be waived in Egypt’s case, citing that “Egypt has made significant progress toward democracy in the last 15 months” while acknowledging that Egypt’s “transition to democracy is not yet complete, and more work remains to protect universal rights and freedoms.”

To that extent, Leahy, who himself authored the conditional amendment, criticized the State Department’s decision:

“Waiving the new conditions on democracy and human rights is regrettable, and handing over the entire $1.3 billion at once to the Egyptian military compounds the mistake by dissipating our future leverage.  Using this waiver authority, at this time, sends a contradictory message. The Egyptian military should be defending fundamental freedoms and the rule of law, not harassing and arresting those who are working for democracy.”

But those events occurred well before the Muslim Brotherhood had forced their new Sharia Law constitution upon it’s citizens, a move which has resulted in much instability in Egypt’s government as well as deep polarization of it’s citizens. In the wake of the low-turnout referendum which upheld the new Islamic constitution, which many suspected to be rigged, scores of Egyptian citizens have been killed in violent protests which continue to erupt and grow larger on a daily basis with anti-Morsi protesters stating that Morsi and his Muslim Brotherhood sanctioned legislation betrays the spirit of democracy while promoting their radical Islamic agenda. The Muslim Brotherhood brushes those accusations of stating that it’s simply political rivals attempting to oust their president.

Following yesterday’s defeated amendment Senator Paul has now introduced a new Bill – S. 201 – to prohibit the sale, lease, transfer, retransfer, or delivery of F-16 aircraft, M1 tanks, or certain other defense articles or services to the Government of Egypt

(a) IN GENERAL.-Notwithstanding any other provision of law, the United States Government shall not license, approve, facilitate, or otherwise allow the sale, lease, transfer, retransfer, or delivery of F-16 aircraft, M1tanks, or other defense articles or services listed in Category VI, VII, or VIII of the United States Munitions List to the Government of Egypt.

S. 201 is expected to suffer the same fate as yesterday’s failed amendment to H.R. 325.

TRANSCRIPT of Sen. Paul’s Floor Remarks:
I rise today to present legislation that would stop the transfer of F-16s and Abrams tanks to Egypt. I think it particularly unwise to send tanks and our most sophisticated fighter planes to Egypt at a time at which many are saying the country may be unraveling.
Ironically, a year ago the Arab spring occurred. Hundreds of thousands of people gathered in Tahrir square to protest a government that was instituting martial law. Ironically the current President now has instituted martial law and once again the dreaded indefinite intention is threatened to citizens in Egypt.
As the writing expands, many see Egypt descending into chaos. What is President Obama’s response to this? To send them some of the most sophisticated weapons we have: F-16 fighters and Abrams tanks. I think this is particularly unwise, and this legislation will stop it.
I think this is particularly unwise since Egypt is currently governed by a religious zealot, a religious zealot who said recently that ‘Jews were bloodsuckers and descendants of apes and pigs.’ This doesn’t sound like the kind of stable personality we would be sending our most sophisticated weapons to.
I think it is a grave mistake to send F-16s and tanks to a country that detained American citizens on trumped up political charges. On a country that currently is still detaining Egyptian citizens on trumped-up political charges.
I think it is a blunder of the first proportion to send sophisticated weapons to a country that allowed a mob to attack our embassy and to burn our flag. I find it objectionable to send weapons, F-16s and tanks, to a company that allowed a mob chanting “death to America” to threaten our American diplomats.
I am concerned that these weapons, some of the most sophisticated weapons in the world, someday may be used against Israel. I’m concerned that these weapons threaten Israel’s security and that sending weapons to a country with a president who recently was seen to be chanting “amen” to a cleric that was saying “death to Israel and death to those who support Israel.”
I think it’s foolhardy to support and send arms to both sides of an arms race. We send 20 F-16s to Egypt which already has 240 F-16s. We send 20 in addition. What does Israel feel? They’ve got to have two for every one Egypt has. It escalates an arms race. It makes it more difficult for Israel to defend herself.
Today we have a chance to stop this folly. I urge my Senators to instruct the President that we will not send any more F-16s and any more Abrams tanks to the current government of Egypt. Thank you, Mr. President, and I yield back my time.

Shock, outrage and “audible gasps” were the responses from a large group of police officers, elected officials and attorneys...