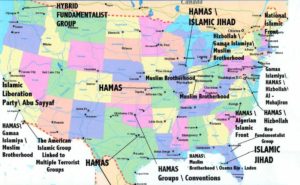 The USA has over 2,000 miles of border to our South via Mexico. Joining the thousands of Mexican illegals coming across the southern border daily is militant Islamist setting up terrorist camps all across the America. “With over 4,000 people crossing our southern border illegally every day, our border remains one of our country’s most critical national security vulnerabilities. In order to carry out an act of terrorism, a militant Islamist simply needs a porous border and a dangerous weapon,” said U.S. Rep. Trent Franks, R-Ariz.

Agents say most of the illegals caught crossing are from Mexico or South America. Still, they say thousands of people caught are classified as O.T.M.’s, which stands for “other than Mexican”. They report that includes hundreds of people from nations that sponsor terrorism. Channel 2 Action News anchor Justin Farmer traveled to Arizona to view a detention center near Phoenix. He viewed records that show illegals in custody from from Afghanistan, Egypt, Iran, Iraq, Pakistan, Sudan and Yemen.

Former Arizona U.S. Rep. J.D. Hayworth has seen the reports. “We have left the back door to the United States open,” he said. “We have to understand there are people who definitely mean to do us harm who have crossed that border.

A Congressional Homeland Security report accused Venezuela of providing support that help terrorists infiltrate the United States through the Texas border with Mexico. The Subcommittee on Investigations of the House Homeland Security Committee found that the government of President Hugo Chavez has issued thousands of identity documents that could help terrorists elude immigration checks and illegally enter the United States. Michael McCaul, a first term Republican from Austin Texas, chaired the subcommittee that produced the findings, “The potential is certainly there for terrorists to infiltrate the U.S. through Mexico. We apprehended five Pakistanis on the U.S. Mexico border with fraudulent Venezuelan documents. We know that Mr. Chavez in Venezuela has openly embraced the Islamic jihad world. We know that Hezbollah operatives have been given safe haven in Venezuela. So the threat is very real.”

A report issued by the House Homeland Security Committee indicates that Hezbollah has a large and threatening presence inside the USA and is successfully raising funds inside the USA to support its Jihad.  Experts as well as current and former law enforcement and intelligence officials agree that Hezbollah, is the most capable of transforming US-based fundraising cells into lethal terrorist cells at the order of the Iranian regime than any other terrorist organization. They believe that there may be several thousand sympathetic Hezbollah donors across America and hundreds of actual operatives.

“Hezbollah are absolute masters at identifying existing smuggling infrastructures,” says former DEA Chief of Operations Mike Braun, adding that the group “is developing relations with those responsible for operating those smuggling operations and then forming close relations with them, so that they can move anything they have an interest into virtually anywhere in the world.”

The Department of Homeland Security has been tracking terrorists in the U.S. coming in from Mexico, and intelligence suggests that many of them are Taliban coming from Somalia. There are even reports of training facilities just inside the Mexican border that train and teach terrorists how to infiltrate and blend into the American culture until the time comes for them to carry out their mission. The FBI and Homeland Security Department don’t know where they all are or exactly how many arrived. 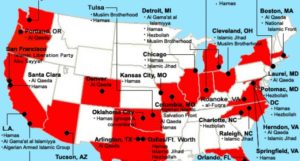 In a Justice Department memo and other documents obtained by the San Antonio Express-News federal authorities know terror suspects are in this country and know who allegedly helped bring them here through Mexico and Texas: a Somali man in custody near San Antonio. The FBI has been trying to untangle a web of contacts surrounding a man named Ahmed Muhammed Dhakane, 24, who has been in custody since 2008, and is considered a “national security threat.” New documents “paint him as a facilitator of groups accused of funding terrorism. They also allege he smuggled potential terrorists here.” Some of the people he smuggled into the U.S. may still be roaming American streets’ 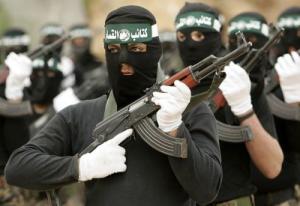 According to  The Counter Jihad Report terror cells have been placed on high alert to attack targets in the United States and Europe should Iran’s nuclear facilities be attacked, a source in the Revolutionary Guards says. The terror cells in the U.S. are being coordinated by Quds Force personnel operating out of the Iranian Interests Section in Washington, the source says. Because Iran and the U.S. have no diplomatic relations, Iran’s Interests Section operates under the umbrella of the Pakistani embassy. “These cells work out of safe houses where ammunition and explosives are stored, each with an operational commander who reports back to Iran,” the source says.

Our Own Government Has Become Our Enemy

Pinal County (Ariz.) Sheriff Paul Babeu told CNSNews.com that rather than help law enforcement in Arizona stop the hundreds of thousands of people who come into the United States illegally, the federal government is targeting the state and its law enforcement personnel. “What’s very troubling is the fact that at a time when we in law enforcement and our state need help from the federal government, instead of sending help they put up billboard-size signs warning our citizens to stay out of the desert in my county because of dangerous drug and human smuggling and weapons and bandits and all these other things and then, behind that, they drag us into court with the ACLU,” Babeu said. The sheriff was referring to the law suits filed by the American Civil Liberties Union and the U.S. Department of Justice challenging the state’s new immigration law.

“Our own government has become our enemy and is taking us to court at a time when we need help,” Babeu said. “If the president would do his job and secure the border; send 3,000 armed soldiers to the Arizona border and stop the illegal immigration and the drug smuggling and the violence, we wouldn’t even be in this position and where we’re forced to take matters into our own hands,” Babeu said. Dever said the federal government’s failure to secure the border and its current thwarting of Arizona’s effort to control illegal immigration within its borders has implications for the entire country.

“The bigger picture is while what’s going on in Arizona is critically important, what comes out of this and happens here will affect our entire nation in terms of our ability to protect our citizenry from a very serious homeland security threat,” Dever said. “People who are coming across the border in my county aren’t staying there. They’re going everywhere USA and a lot of them are bad, bad people.

On page 28 of a report released in October 2006 from the House Homeland Security Subcommittee on Investigations titled “A Line in the Sand: Confronting the Threat at the Southwest Border” this information is found. 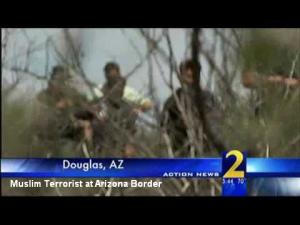 The number of aliens other than Mexican (“OTMs”) illegally crossing the border has grown at an alarming rate over the past several years. Based on U.S. Border Patrol statistics there were 30,147 OTMs apprehended in FY2003, 44,614 in FY2004, 165,178 in FY2005, and 108,025 in FY2006. Most of them were apprehended along the U.S. Southwest border. The sheer increase of OTMs coming across the border makes it more difficult for Border Patrol agents to readily identify and process each, thereby increasing the chances that a potential terrorist could slip through the system. Moreover, there is no concrete mechanism for determining how many OTMs evade apprehensions and successfully enter the country illegally.

“The U.S. Department of Homeland Security (DHS) pays particular attention to OTMs apprehended by the Border Patrol who originate from thirty-five nations designated as “special interest” countries. According to Border Patrol Chief David Aguilar, special interest countries have been “designated by our intelligence community as countries that could export individuals that could bring harm to our country in the way of terrorism.”101. Though the majority of overall apprehensions made by the Border Patrol occur in the Tucson sector of Arizona, the Texas border – specifically the McAllen sector – far outpaces the rest of the country in OTM and Special Interest Alien apprehensions. Since September 11, 2001, DHS has reported a 41% increase in arrests along the Texas/Mexico border of Special Interest Aliens.”

Fox News has DHS documents that over 180,000 illegal aliens from countries Other than Mexico were apprehended from 2007 through mid-March 2010 and the State Department Country Reports on Terrorism said that “smuggling rings have been detected moving people from East Africa, the Middle East, and Southwest Asia”. I am told these people and drugs are then moved up through Central America and into the Unites States through Mexico.
Congressman Connie Mack chairs the Western Hemisphere Subcommittee and says, “I think the question that we all have to ask is, when the terrorist come into Latin America, when they move into Mexico, how many have come into the United States? Our government doesn’t know the answer to that question. That should make all of us very fearful.”

Our borders are not being adequately protected.  Documented Islamic terrorist cells are setting up and training on our soil. The question that needs to be asked is how long before America faces another terrorist attack from inside her borders.

We at D.C.Xposed hope and pray we never find out that answer.

LEOVEGAS AND YGGDRASIL REACH DEAL FOR A CO-PRODUCED SLOT

There is some good news out for Yggdrasil Gaming fans; the company has just broken news of the launch of its first co-produced slot. The...

Innovation Labs and Gaming Innovation Group, its holding company, are in the process of acquiring Casinotopsonline.com. The affiliate...